MicroRNAs in Human Cerebrospinal Fluid as Biomarkers for Alzheimer’s Disease

Alzheimer’s Disease (AD) accounts for a large number of dementia cases resulting in impaired memory, thinking, and behavior. Risk factors for AD include age and family history, but unfortunately there is not yet a definitive way to predict if an individual will develop the disease. There are reference biomarkers that can indicate a higher risk of developing AD, such as APOE genotype. Carriers of the APOE4 allele, present in ~20% of the population, are at increased risk for AD. Cerebrospinal fluid (CSF) is a body fluid found in the brain and spine that cushions and protects the brain from injury. CSF protein biomarkers, such as Aβ42, tau and phospho-tau, are important in screening for brain disease, but these reference markers often lack the sensitivity and specificity necessary for clinical utility.

Extracellular RNA, specifically microRNA (miRNA), has been found in CSF and may serve as a useful resource for improved AD biomarkers. In a recently published study, the Saugstad lab from Oregon Health and Science University examined CSF from a large group of living donors to identify unique miRNA biomarkers enriched in AD patients. In the study, miRNA expression levels from 50 AD and 49 control subjects were assessed using TaqMan Low Density Arrays containing probes for 754 validated miRNAs. Each miRNA was given a “Multitest Score” combining the results of four statistical tests, and miRNAs that passed two or more of the tests were considered for further analyses.

Two statistical tests, log-rank and logistic regression, were used to identify candidates that were twice as likely to be associated with AD status as not. The other tests were two variants of random forest classifier, CART and CHAID, designed to select biomarker candidates able to reliably distinguish AD from non-AD status when grouped with random subsets of other miRNAs. 36 miRNA biomarker candidates were identified by at least two of these analyses. The researchers found that linear combinations of subsets of miRNA, and the addition of ApoE genotyping status, further increased the sensitivity and specificity of AD detection (Figure 1). 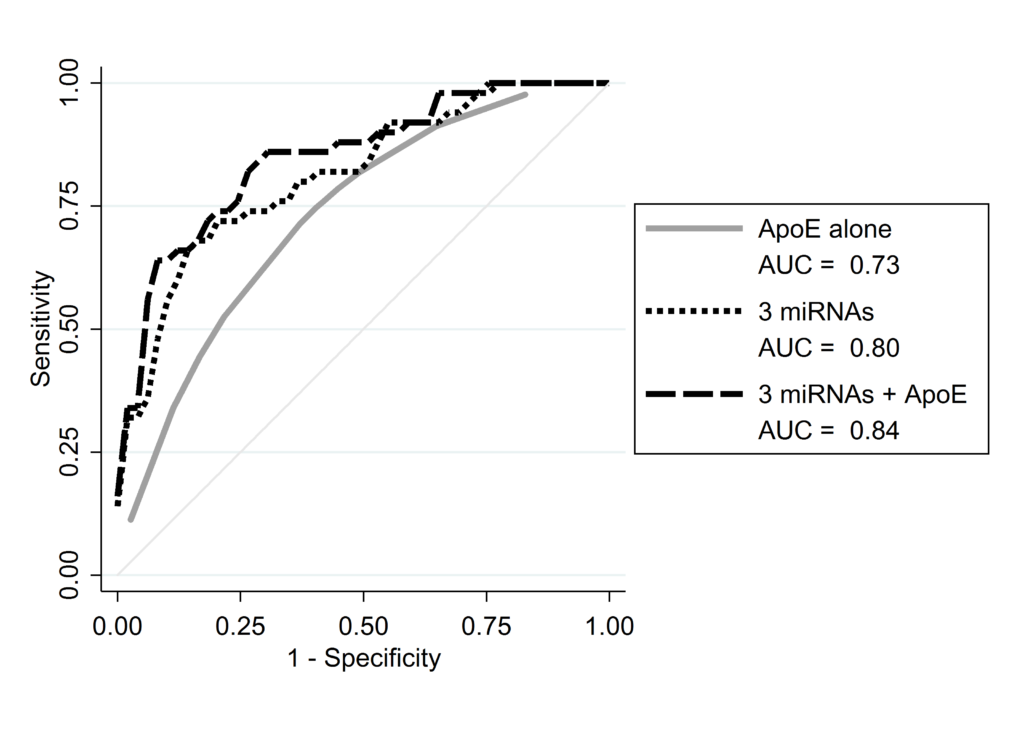 Reprinted with permission from IOS Press.

This study shows the potential use of miRNAs isolated from CSF as AD biomarkers. The stringent statistical analyses and large sample size together provided strength to these initial studies. These 36 candidate biomarkers are currently being tested in further validation studies in CSF from a new group of 120 donors, which will also include APOE genotyping and Aβ42 and tau protein levels. Ultimately, a combination of miRNA CSF biomarkers with existing reference biomarkers (APOE, Aβ42, tau) may provide a specific and sensitive tool for the diagnosis of AD in the clinic.